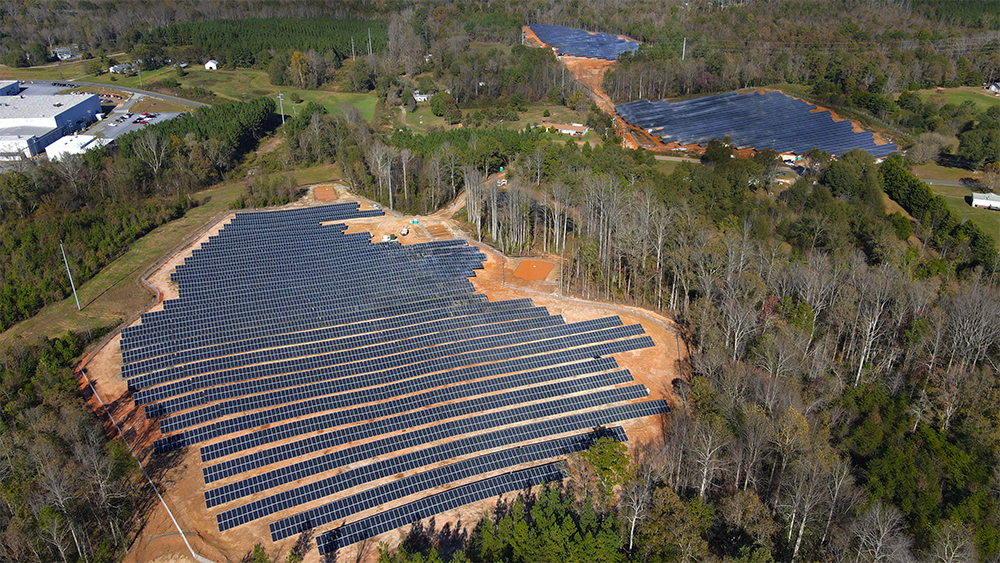 hep takes third US solar park into opera­tion. “Clear“ in North Caro­lina has an installed capa­city of 4.5 mega­watts and is one of 16 solar parks, of the public AIF “HEP – Solar Port­folio 1“.

2 Coun­tries, 16 Projects, 81.5 Mega­watts
With the alter­na­tive invest­ment funds (AIF) “HEP – Solar Port­folio 1 GmbH & Co. geschlos­sene Invest­ment KG“, hep enables private inves­tors to invest in the stron­gest solar markets world­wide: USA and Japan. Through country-specific special AIFs, the HEP – Solar­port­folio 1 has so far invested in two Japa­nese and 13 US projects with a total capa­city of more than 81.5 mega­watts. Two Japa­nese projects were the first to be grid-connected: “Ayabe“ in April and “Kami­gori“ in June. The first US solar park, “White Street“ followed in late October, “Lime­light III“ in late December and “Clear“ in March 2021. Eight further US projects are already under construction.

Solar Park “Clear“
The solar park covers three areas and has a total installed capa­city of 4.5 mega­watts. In December 2020, after an eight-month construc­tion phase, the solar park was tech­ni­cally completed. After a successful test phase, the park was finally connected to the power grid on March 8, 2021. As in the case of the two other hep solar parks in the US, the current collector for the two other US solar parks, is the listed energy company “Duke Energy“. With this energy supplier, a so-called “Power Purchase Agree­ment“ was concluded, i.e., a power purchase agree­ment secures the income of the special AIF in return for secured electri­city prices for the power purchaser.

With hep, Value Crea­tion Remains in one Hand
From finan­cing to project deve­lo­p­ment, construc­tion to main­ten­ance and opera­tion – hep takes care of all services related to the solar park “Clear“. Finan­cing, project deve­lo­p­ment and project manage­ment are managed from the company’s German head­quar­ters. The construc­tion of the solar park was taken over by the expe­ri­enced US solar construc­tion company “hep Petra“, in which hep has a majo­rity stake. “hepPetra“ will also super­vise the park during its opera­tion and take over any main­ten­ance and care measures. In addi­tion, “Clear“, like all the other newly build solar parks, will be connected to hep’s own moni­to­ring system and can thus be moni­tored around the clock from all hep company locations.

hep in the USA
For years, hep has been gaining expe­ri­ence as a project deve­loper in the US solar market. In 2020, hep acquired the project deve­loper “Peak Clean Energy“ located near Denver, Colo­rado. The company has decades of expe­ri­ence in deve­lo­ping large-scale solar projects with a capa­city star­ting from 10 mega­watts and at the time of acqui­si­tion had a project pipe­line of more than four giga­watts. Shortly after, a majo­rity stake in the solar company “ReNew Petra“ followed which now operates under the name “hep Petra“. “hepPetra“ based in North Caro­lina, has deve­loped over 100 mega­watts in the US solar market to date and has construc­tion licenses in 14 states.

Solar Market USA
The US curr­ently are in second place of the top solar markets world­wide. 29 of the 50 states have volun­ta­rily committed to the so-called ‘’Rene­wable Port­folio Stan­dards’’ and have set ambi­tious expan­sion targets in the field of rene­wable ener­gies. In 2019, 13.3 giga­watts of solar energy were installed nati­on­wide. According to the US-American solar asso­cia­tion, a 23 percent increase was recorded in compa­rison to the previous-year period.